Rust spreads mainly in secret and can slowly eat away at your vehicle from the inside out over the years. When derusting a classic car, you must therefore penetrate every inaccessible corner of the body and all cavities in order to save your collector's item from death by the reddish-brown danger. You can find out how to derust a classic car properly here!

The good news is that classic cars are made of stronger and more stable materials than modern vehicles today, which makes rust removal a little easier. The bad news is that almost all classic cars have to deal with rust. Rust behaves in much the same way as mould: if you don't remove even the last microscopic shred and don't keep everything perfectly dry, it will always come back - because corrosion is mainly triggered by the diabolical interaction of air and water!

With a little practice and the right tools, even the non-professional can derust his classic car, as well as his youngtimer, himself!

Rust can only be permanently removed from accessible areas by sandblasting. In inaccessible areas, rust can only be removed by exposing the affected areas and then sandblasting, or by partially replacing the affected areas. The cavities in the vehicle in particular are a real rust biotope, because moisture in the form of condensation spreads particularly readily and widely there.

Rust also feels very comfortable under cracked and old underbody protection or poorly applied sheet metal patches. If there are a few layers of filler and paint on top, then in the worst case only a tattered reddish structure can be found underneath. And last but not least, even supposedly intact-looking surfaces are not immune to rusting on the inside!

Especially when restoring your car, corrosion treatment is one of the most important steps! When derusting a classic car, you have to be thorough and choose both the right tool and the right technique for different spots.

What exactly is rust and what are the consequences of it?

Rust is the common term for corrosion on steel vehicle parts. Steel corrodes, i.e. it reacts with the oxygen in the air. The problem with cars, especially classic cars, is that rust takes on about 10 times the volume of the original material. When sheet steel corrodes, paint, underbody protection, protective wax, sealant, everything that lies on top of it or is connected to the sheet metal, is torn away with it. This paves the way for further corrosion.

What is the procedure for removing rust from sheet metal?

Derusting a classic car is not only one of the most important restoration tasks, but also one of the most unpopular, as the results usually do not last long and the work is simply unpleasant. In order to be able to begin the time-consuming work of derusting, a number of things must be prepared and observed. Otherwise, the joy of a rust-free classic car will be short-lived.

In concrete terms, this means that in the first step there is no way around exposing all rusty parts and then cleaning them of

Only then can you begin to derust the affected areas of the classic car.

Body shell on which the rusty spots have already been replaced. Sanded down and made ready for priming. Photo: Wolfgang Flaeschner

Derusting with an angle grinder

Large surfaces can be derusted well with an angle grinder and a flat grinding wheel. A 60 grit abrasive is usually recommended. Derusting with the grinder is quite quick and not too strenuous. However, it only works on freely accessible areas that are also rather large.

You can also use a drill to remove rust from the body of the vehicle. For this, you only need a metal grinding attachment, so-called disc or pigtail brushes. This allows you to get to some of the more inaccessible corners of the vehicle - for example, on the underbody or in the corners of the body.

For the underbody, a cavity sealant against rust is indispensable, as there are many openings here where moisture and condensation can collect. You should always consult a professional for this. For example, a sealant that is applied without completely drying out the vehicle first will trap moisture in the underbody. You can probably imagine what happens then…

Derusting by hand with sandpaper or wire brush

Even professionals break into a sweat here, because derusting by hand is extremely strenuous and that is why it is not done! However, you can only get to the hard-to-reach places on the classic car by hand. You can help yourself with a sanding block, for example, but this is only less strenuous to a certain extent.

After some time, there is simply not enough strength in the fingers to grind away the rust, especially in the corners of the vehicle. But there are also self-starters among the rust removal methods! 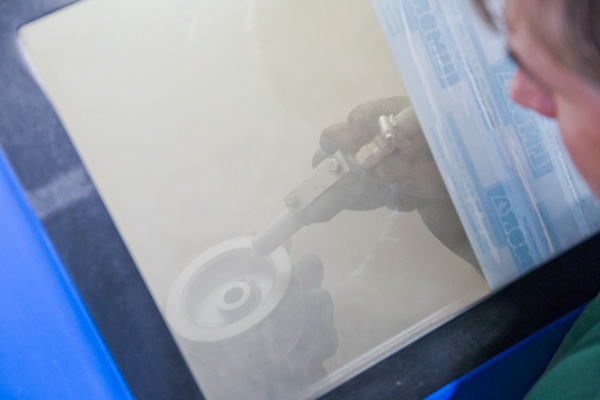 In the meantime, quite sophisticated blasting materials are used for sandblasting, which destroy heavy rust in no time at all. However, very few amateur craftsmen own a sandblasting unit, which is why you have to call on the help of a specialist company for this type of body rust removal.

And as a reminder: sandblasting should not be used on thin areas that have already been worked on many times.

In any case, it is important to pay attention to the different methods of the individual manufacturers and to follow the respective instructions meticulously.

It makes sense to chemically remove rust from the bodywork, especially in areas that are already quite thin and pre-loaded. If you grind too roughly over metal that is too thin, you sometimes have to cut out entire parts and throw them away because they no longer have the necessary stability. Rust can be easily removed chemically with a rust converter.

For this, the surface to be treated must be free of grease and oil, otherwise the chemical reaction for rust removal cannot take place. After the converter has been applied with a brush, it takes on average one to two days for the rust to disappear, i.e. to be converted into a stable iron compound.

What to do if rust is very advanced?

If there is a lot of rust on parts of the bodywork that have been taken away, there is only one thing that helps: cut out the rusted areas and weld in new sheet metal. It is better to leave welding work to a professional if you have no previous experience. This is because the transitions in particular require the utmost precision and sure instinct to ensure that the seams are stable and clean without forming unsightly waves and dents.

Rust first develops where the protective layer of paint is damaged. This can be polished and waxed, but it is no use, the rust remains. It may make sense to treat the small area with a rust eraser (glass-fibre pen), re-primed and painted (dabbing is sufficient).

Afterwards, the treated areas can be sealed with hard wax. This method offers protection for an attacked or slightly damaged paintwork, but is only effective for a short time. Sealing is only a variant for home use that you can do yourself.

In most cases, the brown-red spots return after some time. This is because rust, as already mentioned at the beginning, can spread quite inconspicuously from the inside out. There are also various home remedies circulating on the internet, such as treating rust with a mixture of vinegar, oil and baking soda. We would advise against this, as you never know how older classic car paintwork will react to such remedies.

This article has probably mainly conveyed to you how perfidious rust is and what damage it can do to your favourite. The tank in particular is considered especially susceptible to rust, but it is far from the only part that is affected. Rust removal from classic cars is a task that you must take on regularly.

So it's best to always keep an eye on your bodywork and ensure a dry and well-ventilated parking space for your car all year round. And even if rust does affect your car, it doesn't mean the end of days for your classic car - after all, it's not hard to find a professional car repair shop!