After finishing his apprentice Trevor Wilkinson built some simple cars from parts that were within his reach. TVR sticked to this tradition for almost 60 years faithfully. Fast handicrafts with fibreglas bodywork and a remarkable wide range of engines were the core business of the house. Different company owners varied the basic system gradually, so that in later years even own engines were used..

Here you will find all TVR series models from 1958 to 2006 at a glance - gladly also as a PDF file. This way you can click directly on the model series that is relevant to you. Of course, as a true TVR enthusiast, you are also welcome to click through the other models of the British classic. In any case, you will find an extensive range of TVR spare parts.

The Grantura was the first TVR sports car to be produced in a large series and shaped the appearance of the British classic until the 1970s. Common to all models is the plastic body and the grille frame. The series was also popularly purchased as a construction kit and individually motorised.

The small sports cars had a lot in common with their predecessor: all had a grid frame, a plastic body and were optionally equipped with four-cylinder engines from BMC, Coventry Climax or Ford of Britain, depending on preference.

The Vixen replaced the Grantura, which had been in production since 1959, and gradually became part of TVR's M series. The sporty two-seater coupé was produced in 6 versions - S1 to S4 with Triumph engine and transmission and as 1300 as well as 2500. At Limora you will find suitable TVR spare parts for all models!

Here you will find TVR spare parts for the models Tuscan Se, V6 and the V8 with its impressive displacement of 5300 cm3. This model replaced the Griffith 400 on the US market and the TVR Griffith 200 in Europe. The V8 has also some features from the TVR Vixen and Grantura.

The M-series is the successor to the Vixen at TVR and the predecessor to the Taimar, which followed it in 1979. As usually at TVR, the M-series came on the market with different engine capacities - from 1.6 litres to the US version with eight-cylinder and 5.0 litres.

With its long bonnet, tight passenger compartment and short rear, the Tasmin is the perfect 80s sports car. After the Grantura, the Vixen and the M-Series, the fourth generation of TVR models was born with the Tasmin, that was inofficial called the TVR Wedges.

As members of the Wedges family at TVR, the above models are undoubtedly related to the Tasmin. The 420SEAC in particular stands out visually. If you are looking for Wedges-TVR spare parts, Limora is the ideal contact with exact-fitting parts and experience.

The TVR S-series with 6 different models are all open sports cars that were produced from 1986 to 1994. The series can be classified below the high-performance Wedge series or the Griffith and follows more classic patterns in terms of design again.

The name of this TVR Griffith model comes from the monster of Greek mythology, which is composed of parts from different animals. So it´s a sports car, but also suitable for travelling. It is longer, offers more space than its predecessors and is softer in its styling.

The TVR Tamora is a two-seater sports car that was built from 2002 to 2006. The Tamora family also includes the T350T, the T350T, the Typhon and the Sagris. The cars were intended to fill the gap left after the Chimaera and Griffith ceased production.

The Cerbera is a 2+2 seater coupe with outstanding performance. For the first time, TVR used engines developed in-house rather than bought in, a V8 and an in-line six-cylinder. Both engines were light, powerful and sporty, but a touch too unreliable for a car in this price range.

The Speed 6 is not only known for its appearance in Password Swordfish, it is also known for the TVR philosophy that neither airbags or other safety systems increase safety. If you still want to keep on the safe side, then you will find custom-fit TVR spare parts for your Speed 6 here. 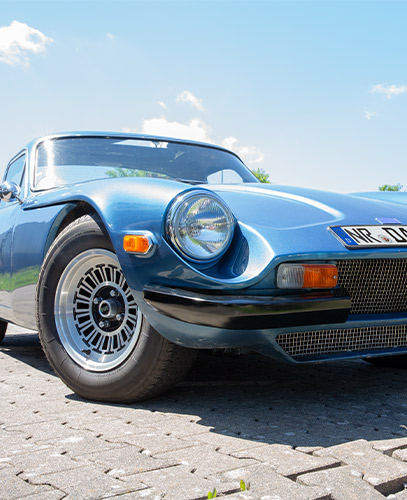 With TVR, you can be sure of a few things: namely, an unbelievable variety of models and driving pleasure at the highest level. Visually, the lightweight sports cars are absolute eye-catchers in any case. Here you will find an overview of the various TVR models that were created up to 2006 - perhaps your enthusiast's vehicle is among them!

Our special offers for TVR

The most important thing in parts supply is absolute TVR safety for the selling and advising staff. You can fully trust the competent experts at Limora, because we set the standard here. If you haven't found the right TVR spare part on our site, visit us in one of our shops or contact us – from Monday until Friday from 6.00 AM to 10.00 PM and even at the weekends.